back next
Whisky / / Irish Blended 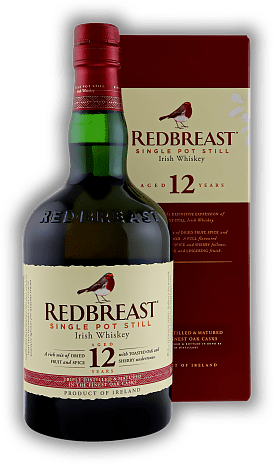 The Robin Redbreast is the only bird which sings continuously throughout the dark Irish winters and is one of the very few small birds that choose the winter in Ireland. It is this enduring spirit which inspires its namesake, Redbreast Whiskey.

When the world demanded lighter, more accessible Whiskey styles, Redbreast stood steadfast in its belief of the tradition and significance of single pot still Irish whiskey. For the past century he has been the standard bearer for this quintessentially Irish style of whiskey.

Made from a mash of malted and unmalted barley and then triple distilled in copper pot stills. He displays the characteristic full and complex flavour of pot still whiskey, with the distinctive influence of pot still whiskey which has been matured in sherry casks, the legendary sherried redbreast style is a joy to behold in each and every bottle.

It is unique to Ireland in general and to the Midleton Distillery, Co Cork, in particular, and is regarded as the quintessential style of Irish whiskey. Made from a mash of malted and unmalted barley and then triple distilled in traditional copper pot stills. Pot Still whiskeys are characterized by full, complex flavours and a wonderful creamy mouthfeel.