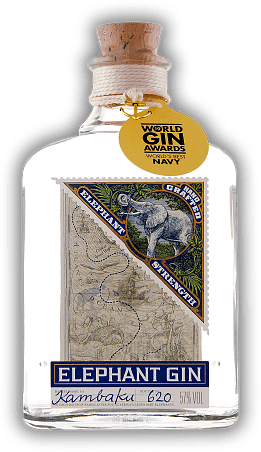 The cause
Every year more than 35,000 elephants die because of uncontrolled ivory poaching; one African elephant dies every 15 minutes. By contributing 15% of its profits to Big Life Foundation and Space For Elephants, Elephant Gin take an active part in the conservation of the African elephant.

They want to let them live as a legend and dedicate the new edition to the died male elephants.

Juniper: To guarantee consistent quality, Elephant Gin sources its juniper from across Europe, mainly from Macedonia, Hungary and Tuscany.
Mountain Pine Needles: Specially cut from the Salzburger Mountains, the Mountain Pine complements the Juniper's natural pine notes.
Lavender: For its sweet overtones, to bring out the floral notes in the gin.
Sweet Orange Peel: Sourced from Spain, the peel adds to the gin's sweet aromatic notes. The company favours orange peel over lemon for its round flavour.
Fresh Apple: Sourced from the orchards surrounding the distillery, the apples introduce a fresh, crisp and sweet note to the gin.
Cassia Bark: Traditionally used in gin and is a close relative to Cinnamon. Elephant Gin uses Indonesian cassia for its warm aromatic notes.
Ginger: It was chosen for its warm and spicy characteristics. Sourced from China, the ginger serves to expand the gin's flavour on ones palate.
Pimento berries: They are part of the Myrtaceae plant family, sourced from Mexico. Pimento gives the gin its slight peppery note.
Devil's Claw: European colonists and early explorers brought Devil's Claw back home for its healing properties. Sourced from South Africa, for its distinct flavour.
Buchu: A delicious blackcurrant-like flavour, Buchu is a plant native to the lower elevation mountains of western South Africa.
Elderflower: Sourced from the Ukraine and Poland, They use elderflower for its sweet flavour, which complements the apples' fresh notes.
Lion's Tail: is native to Southern Africa and treated as a magical herb there. It adds another distinct herbaceous note.
African Wormwood: Long used as an ingredient in spirits such as absinthe and vermouth, it introduces a bitter floral note and is sourced from South Africa.
Baobab: Elephant Gin imports this African ‘superfruit' from Malawi. The plant has sharp citrus qualities and three times the vitamin C of an orange. Oh, and its fruit are a huge favourite of the elephants.